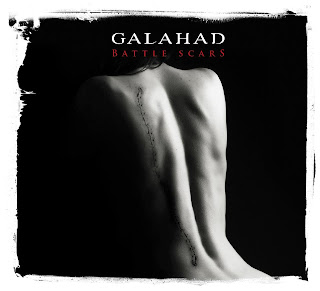 Empires Never Last dates back five years ago and finally here is the sequel: Battle Scars. An album which marks the parting of bassist Neil Pepper, who at 44 years old, died of cancer last year. Pepper, despite the discomforts of the disease, still managed to play all bass parts for both Battle Scars and Beyond The Realm Of Euphoria, with a planned release for later this year. Out of respect, the remaining band members decided to continue as a foursome and Pepper is mentioned on three tracks as the composer / writer. Mark Spencer (Twelfth Night) will take his place as bassist during the upcoming concerts.

On Battle Scars the techno, ambient and dance influences, introduced since the recruitment of keyboardist Dean Baker, are strongly extended. The result contains a potpourri of styles and lifts Galahad, in terms of musical presentation, to the 21st century, while the progressive roots through Hammond and Mellotron samples are not forgotten. From the orchestral classical opening of the title track the listener rumbles on a rollercoaster ride of styles, tempo changes and atmospheres, which peaks on the trance excesses of Seize The Day. Despite the difficult way of creating this album, the band completely goes for it. Strong guitar playing  by Roy Keyworth, with old fashioned solos in Reach For The Sun and Singularity. The pleasant voice of Stuart Nicholson and the now and then catchy vocal lines, especially the title track and Seize The Day, which will make them great sing-along songs during the upcoming concerts. Pepper's tight bass and the fine drumming of Spencer Luckman and finally the evocative notes of Dean Baker. It already makes Battle Scars one of the highlights of 2012.

No weaknesses to mention? Yes, but some really silly ones. The limited available, 180 grams, vinyl version, clocks at only 44 minutes. The cd (supplied free with the vinyl) contains the 2012 version of Sleepers as a bonustrack. For the music lovers and the collectors among us, the website offers a free downloadable demo version of the beautiful and highly sensitive Another Life Not Lived. Stuart Nicholson and Neil Pepper originally wrote the song for this album, but the band dared not to finish the song because of the burdened text (download available) and the emotional experiences with Neil Pepper.

Popular posts from this blog

A Flock Of Seagulls

Being a fan for many many years I was really surprised the band decided finally, after 25 years, to do an European tour again. I am aware of the fact that it's only Mike Score nowadays who's left of the old line-up. Still I like to see them, because back in 1984 I was unable to visit the famous Noorderligt at Tilburg. On 09-09-09 A Flock Of Seagulls will play the well known Paradiso theatre in Amsterdam. I became an instant fan of the four when I heard I Ran on the radio. But it was Wishing (if I had a photograph of you) which really turned me into AFOS. Through the years I was able to track down most of their vynil releases. And of course the CD's followed as well. I even became a member of the Airborne Division. With the internet things changed and in 1996 I was able to get a CDR copy of most of the b-sides and rare recordings of AFOS ripped from vynil, which I like to share with you. The recordings are from the period 1982 - 1985 when they had the line-up of: Mike Sc
Read more

The Unknown Beauty Of The 80s

December 29, 2018
I could not resist. So to end the year in style I decided to come up with two new compilations to round up the number to 70. Volume 69 Volume 70
Read more

The Unknown Beauty Of The 80s sofar

January 26, 2019
It was 2002 and on the trip back from a well deserved and well spent holiday in Switzerland we drove back home on the German highways. The radio was on for the whole day and played the tracks from the German and US base radiostations. Along came The Great Commandment of Camouflage which made quite an impression on me. Although my teenage years were in the 80s, the Dutch radio didn't bring that much new wave music which soon after the trip I would discover. I started searching for New Wave music, collection stuff from blogs and a few years later from the New Wave Outpost. And my musical buying changed a lot during that time. In 2005, for fun, I created the first 60 Volumes and a Bonus Volume (the later 61) of what became to be known as The Unknown Beauty Of The 80s. In these days I travelled a lot by train from home to work and back, which gave me time to listen to my homemade cd's. In 2015 I dug op the cd's and started the project all over again trying to find all of
Read more

This is a Flickr badge showing public photos and videos from Rissan. Make your own badge here.