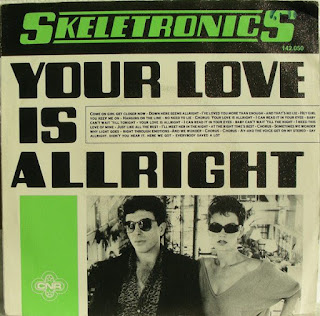 Some indept information about SkeletronicS, after I spoke with Alice Schreij.

After Danny Shoshan released the single "What Did It?" under the name Skeleton, Alice and Danny met each other in the Netherlands and SkeletronicS was born. On the first single "Your Love Is Right" the record company forgot to mention her, which was set right on the 12" version of the single where she is credited as "assisted by Alice Schrey. 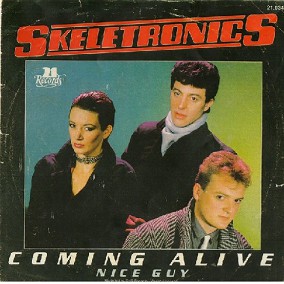 On the second single Coming Alive she is mentioned as one of the co-writers of the song.

Although more material was written during the short period the band existed, nothing of that got a proper release since the band broke up due to the hugh success in Italy and Spain (in both countries they scored a top 10 hit), which, looking back, came too quickly for the band.

Nowadays Alice still works under the name of SkeletronicS, while Danny, returned to his native country Israel long ago.

A couple of years ago Alice came into possession of the original tapes of the songs, which were digitized. Via a Finnish producer several remixes of the singles were created by international DJ's while in the Netherlands Alice worked on a remix with Salvador Breed.

Popular posts from this blog

The Unknown Beauty Of The 80s sofar

January 26, 2019
It was 2002 and on the trip back from a well deserved and well spent holiday in Switzerland we drove back home on the German highways. The radio was on for the whole day and played the tracks from the German and US base radiostations.

Along came The Great Commandment of Camouflage which made quite an impression on me. Although my teenage years were in the 80s, the Dutch radio didn't bring that much new wave music which soon after the trip I would discover. I started searching for New Wave music, collection stuff from blogs and a few years later from the New Wave Outpost. And my musical buying changed a lot during that time.

In 2005, for fun, I created the first 60 Volumes and a Bonus Volume (the later 61) of what became to be known as The Unknown Beauty Of The 80s. In these days I travelled a lot by train from home to work and back, which gave me time to listen to my homemade cd's.

The Unknown Beauty Of The 80s 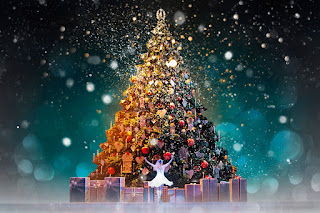 Back to 2005 when I created a compilation series of eighties tracks collected from various sources over the internet. The series ended after 60 volumes and a bonus volume.

Ten years after date I picked up the project by trying to find all featured tracks in a 320Kbps MP3 rip. It took me several months but in the end was able to get the job done.

The funny thing is that each time I was triggered to return to those 80s music styles after I decided to quit, or taking a break from, writing for the Dutch progressive rock magazine iO Pages. This summer the magazine celebrated their 150 issue. For me time to call it a day.

So as expected I turned back to the 80s favorite music styles like new wave, post punk, synthpop, gothic and more. Over the months I collected a lot of new unknown songs to me and created seven new volumes. Through this blog entry I temporarily offer you, just before Christmas, the volumes 62 to 68 as seperate downloads.

So what can you expect. A great bunch of, in total 1…
Read more

March 09, 2019
This Volume was not planned for quite awhile. I was in the assumption that the first new addition would be a new installed of An Introduction To Dutch New Wave. But, unfortunately, while creating a bootable USB stick of Windows 10 Build 1809, I choose the wrong medium and therefore destroyed and formatted my "unsorted music SSD" containing an amount of 450GB of music, photos and other files.

I tried several recovery programs resulting in the same outcome: I had lost the files. In the end I turned to a recovery firm, who offered to check my drive for free in five days. After that periods, possibly after shelving my drive and do nothing, they contacted me and told me they could give a good try after paying them nearly € 250. By that time, fortunately, I had found a backup of the drive dating to early September. I accepted the loss, and started to create the Spleen database again and supplement the Unknown Beauty database. Also it took me some time to create the other files.

This is a Flickr badge showing public photos and videos from Rissan. Make your own badge here.